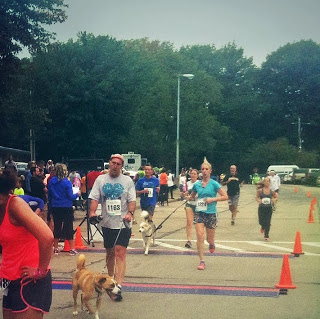 The annual Halloween-themed “Monster Mutt Dash,” a dog friendly 5K and 1 mile walk, brought in a packed crowd of runners and dog lovers all out to support the Berea Animal Rescue Fund this past weekend. 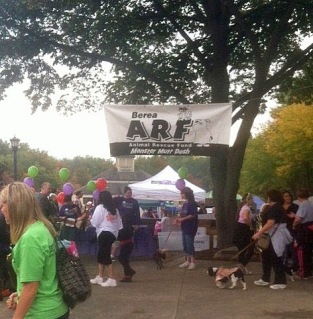 According to Juleen Russell, Marketing/Public Relations for the Berea ARF, the event broke attendance records this year, with 974 walkers/runners – 224 more than last year. Since I haven’t been able to train my dog to be a runner, I was excited to take part in the event as part of the one-mile walk. The runners and walkers all lined up together, which seemed a little chaotic to me, but most of the walkers from what I could tell were smart enough to head toward the back of the pack to let the runners go first. My sister, who does not own a dog, did the 5K and said that it wasn’t that crowded really. Most of the runners around her didn’t have dogs, so there was a lot of space to run. 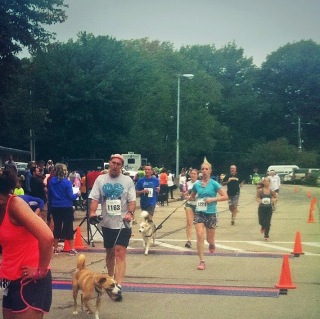 There was also a lot of good Halloween costumes, which made the walk especially fun. Hunter and I enjoyed walking next to this cute costumed dog. I think Hunter thought his costume meant he should race him. 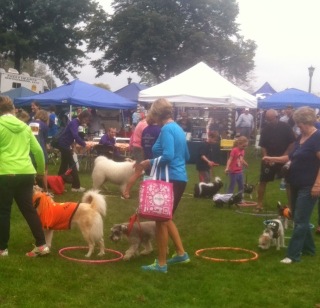 Organizers are still running the numbers, but they are currently at 53% of their goal of $15,000, according to Russell. The fund raising page will be up until Nov. 12, which means there’s still time in case you would like to donate. Visit the fund raising page for more details: https://fundraising.active.com/event/MonsterMuttDash.

All in all it was a fun day at the Monster Mutt Dash. My sister and I decided this will be an annual event for us. I’m already starting my training for Hunter to do his first 5K at next year’s event!